One of our initiatives is to assist in providing face-to-face knowledge sharing and development opportunities around the world. One way we do this is by sponsoring BSD-related conferences and FreeBSD Developer and Vendor Summits. We recently sponsored both BSDCan 2017 and the FreeBSD Developer and Vendor Summit in Ottawa, Ontario, Canada, which took place June 7-10, 2017. Many of our board and staff members attended the summit and conference to run tutorials, give presentations, lead sessions, work with developers, give demos, and share knowledge. 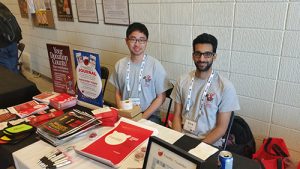 In addition, this year we were pleased to bring our new University of Waterloo interns to the conference where they had the opportunity to demonstrate some of their projects at the Foundation table.

Board bios are available here. We then spent the rest of the day working on strategic plans and goals for the next 12 months.

The Developer Summit followed over the next two days. There were 109 attendees from all over the world including: Germany, Belgium, France, Japan, Australia, China, Canada, and the US. Gordon Tetlow did an outstanding job organizing and running the summit. He said, “The BSDCan FreeBSD Developer Summit would not be possible without the generous financial help from the FreeBSD Foundation. With the Foundation’s support, the developer summit provides the opportunity for many FreeBSD developers to sit in the same room and make forward progress on topics that can be hard to address online. Additionally, the Devsummit provides a venue for downstream vendors of FreeBSD to provide critical feedback to help guide development efforts to continue to be relevant to the evolving needs of the industry.”

Both of our interns had the opportunity to

participate. Guangyuan Yang (Charlie), presented some of his work during the testing session, and Siva Mahadevan asked for input for the makefs project he is working on. It was great seeing our interns not only getting immersed into the FreeBSD community so quickly, but also, being able to present some of their work after joining our team only five weeks ago.

Ed Maste ran the Vendor Summit session on Thursday, where vendors and developers discussed their Haves/Wants/Needs.

A lot of work gets done during the summit, not only because of the working sessions, but also because developers will move to the Hacker Lounge each day after the summit to continue working together on projects.

You can find out more about the developer summit here:

The actual BSD conference directly followed the FreeBSD Developer and Vendor Summit. We had again staffed our Foundation table where we handed out free stickers and other cool swag and literature to help promote FreeBSD. The table gives us a chance to talk to people from the community, allowing us to find out what they are working on and how we might be able to help them. Also during the conference, many Foundation team members gave presentations including: 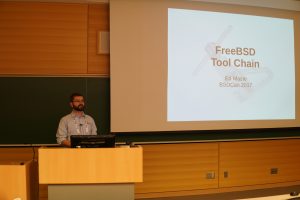 Philip Paeps (Board Director) – Not Simply Pieces of String

I gave a Foundation Update during the Sponsors BOF where I had a chance to talk about the projects we’ve been working on over the past few months.

Thanks to the continued generosity of Netgate, we raffled off two MinnowBoard Turbots that allowed us to raise almost $2,000! Congratulations to winers Navdeep Parhar and Jonathan Anderson. 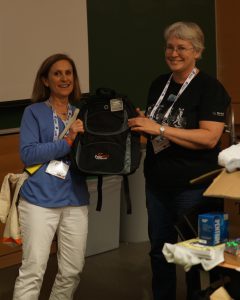 At the Closing Session we recognized three people for their contributions to the FreeBSD Project:

• Peter Grehan: for his bhyve development work
• Dru Lavigne: for her documentation, BSD Certification, and outreach work
• Alexander Motin: for his work on improved storage subsystem and drivers

As I look back on the week, I realized that we spent our time putting plans together, discussing projects to support, participating in and leading discussions in various areas of FreeBSD, sharing knowledge and talking to FreeBSD users and developers about how we can better support them. All in all, it was a very productive week, and we look forward to continuing to support and participate in events like these in the future!