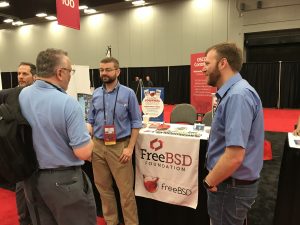 The Foundation booth was also staffed by FreeBSD committer Brad Davis and Doug Mcintire from Netgate. We met up Wednesday morning to set up the table. We were part of a “nonprofit pavilion” which consisted of eight or so tables, located between Open Camps and Operation Code. Open Camps hosts 40+ conferences per year across dozens of open source projects. Operation code aids military vets and their families learn coding and web technologies.

Brad, Doug and I took turns staffing the booth, and visiting other booths. I also I attended a few talks. We had a steady stream of booth visitors over the two days, with very little down time.

To help attract booth traffic, I brought a Raspberry Pi 3, with a small LCD display attached. As a demo 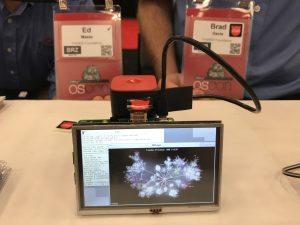 the Raspberry Pi showed a video of a Gource rendering of changes to the FreeBSD source tree over time (see example). The demo brought a lot of folks to the table, asking about the video and the hardware. Many of the attendees expressed surprise that FreeBSD runs on ARM, and it was nice to be able to report that not only have we been running on 32-bit ARM for a long time, but we’ve been running on 64-bit ARM for nearly two years as a result of our Foundation-, ARM- and Cavium-sponsored port.

Overall, OSCON is very important event for the Foundation. It provides us with an opportunity to both introduce FreeBSD to a new audience while reminding former users what they’ve been missing. We look forward to attending next year.