Back to FreeBSD Resources

FreeBSD now has a number of continuous integration jobs on Jenkins CI to build and test FreeBSD on various architectures, and the newly implemented Tinderbox View presents a high-level, simple dashboard to the real-time FreeBSD CI build status.

This display is so useful that we wanted a physical version in our office to monitor the build status more easily. What started as a side project during my first few weeks of interning at The FreeBSD Foundation, has become a useful LED display of the current FreeBSD CI (continuous integration) build status, and is running 24/7 in the Foundation Kitchener office, proudly running FreeBSD on a BeagleBone Green.

Install FreeBSD on the micro-SD card

To get started, you can download an image from the FreeBSD Snapshot site with filename labeled as BeagleBone. In this case, we download:

to get the .img image.

You can always choose to build FreeBSD from source code if you want to experience the latest changes for the support of BeagleBone and are comfortable with the process. Crochet is the tool to use, and you can find a detailed guide on GitHub.

The dd(1) utility is used for raw data copying such as, initializing a disk from a raw image.

dd requires specifying if (input file), of (output file) and bs (copy block size). These arguments should be changed to match the actual file and device name.

Specifying a block size is not necessary, but the default setting will result in very slow operation.

If you are not sure of which device it is, simply run:

right after inserting the micro-SD, or:

to see the corresponding device name.

After the operation finishes, you can insert the micro-SD card into the BeagleBone.

A serial cable might not be necessary as you can wait until it boots and try to ssh to it (the system configuration might prevent you from logging in as root with ssh though). However, since BeagleBone Green doesn’t have an HDMI output, you can see what is going on through the whole booting process with a serial cable, making it much easier to diagnose if something goes wrong.

The serial console of BeagleBone Green is exposed on a 6-pin header.

The built-in cu(1) utility can be used for serial communications. cu can only access the /var/spool/lock directory via user uucp and group dialer. Use the dialer group to control who has access to the modem or remote systems by adding user accounts to dialer using pw(8):

Connect the USB to TTL cable to BeagleBone and computer, then run the cu utility and specify the line speed of 115200 baud.

You won’t see any output yet.

Note: Using sudo to use cu is not a good practice, instead you should add the user to the dialer group as above stated, or grant everyone’s access as an alternative by running:

The BeagleBone Black can boot from either the onboard eMMC or a micro-SD card. By default it boots from eMMC. To boot from micro-SD, first hold down the boot switch, then apply power. Don’t release the button until you see it starts booting FreeBSD (or count to 5).

The boot switch is just above the micro-SD slot.

Tip: Making a BeagleBone Black Always Boot From the Micro-SD
The AM335x chip on board actually boots from the first partition that has the active flag set. After using the “holding the boot button” method described above to boot FreeBSD and log in as root, you will be able to turn off the bootable flag of the onboard eMMC to make it always boot from the micro-SD:

To restore this change and make the eMMC available again do:

Alternatively, you can copy the FreeBSD image to eMMC so no pressing the button is needed.

The system may refuse to proceed on some commands if the system clock is wrong.

In FreeBSD, it is recommended to use both ntpdate and ntpd. ntpdate will set the clock when you first boot so it’s close enough that ntpd will work with it. Add the following to /etc/rc.conf:

Then read through /etc/ntp.conf. It’s pretty well documented so it should be obvious what to set.

Open /etc/ssh/sshd_config and change this line:

then, restart the ssh daemon:

and you will be able to login as root via ssh.

Test the GPIO on board

Let us start from mastering the control of an external LED. 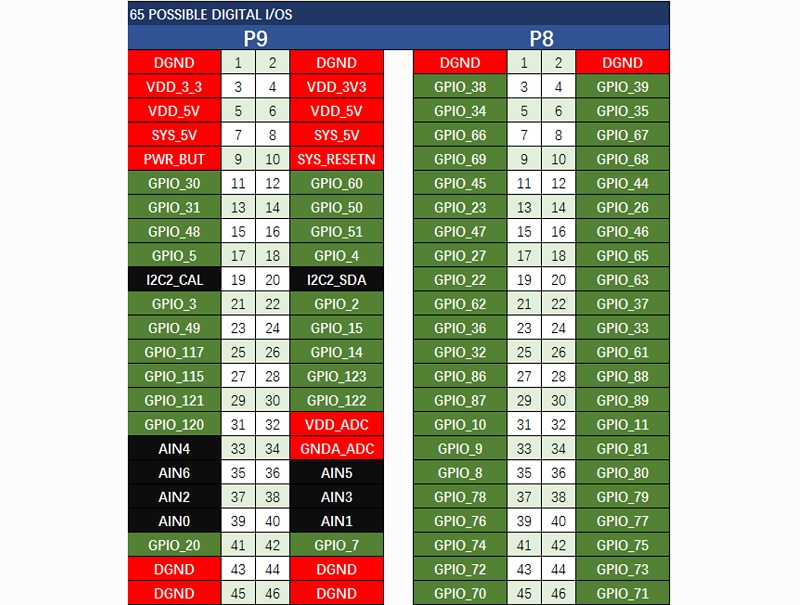 Now we connect a LED and a 200Ω resistor using jumper wires. 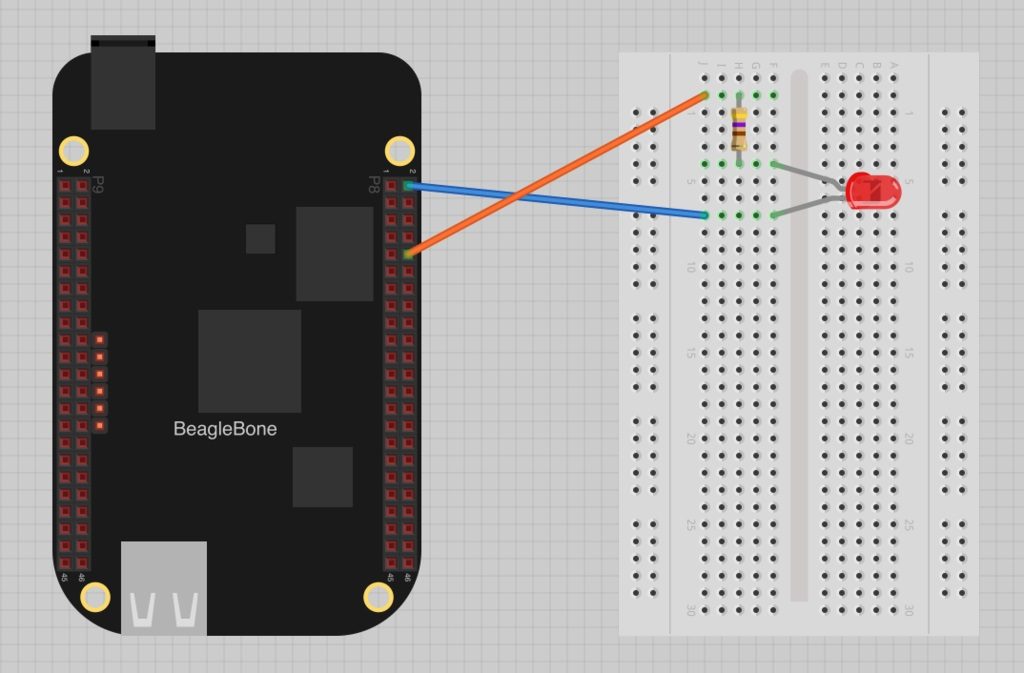 The top two connections on the BeagleBone expansion header are both GND. The other lead is connected to a pin of your choice.

No programming is required at this moment, as FreeBSD provides us with the gpioctl(8) utility which could be used to list available pins and manage GPIO pins from userland.

Let’s list all the available pins defined by device /dev/gpioc0:

By default, all the IO pins are set to be inputs. This does not work for our LED. Instead, we need the pin it is connected to be an output, so we configure that:

The pin should be output mode now, but the LED should still be off. To turn it on, type:

Now we have set the logical value of pin 3 to be 1, and the LED is on! To turn it off again, type:

You can try blinking the LED by writing a bash script with a simple loop.

The LED RGB strip we used is packed with 60 APA102s and can be controlled with a standard SPI interface. However, at this moment, FreeBSD has no userland support for SPI devices. We used Bit banging to simulate the SPI Protocol as a workaround.

1. Wire LED strip to the BeagleBone 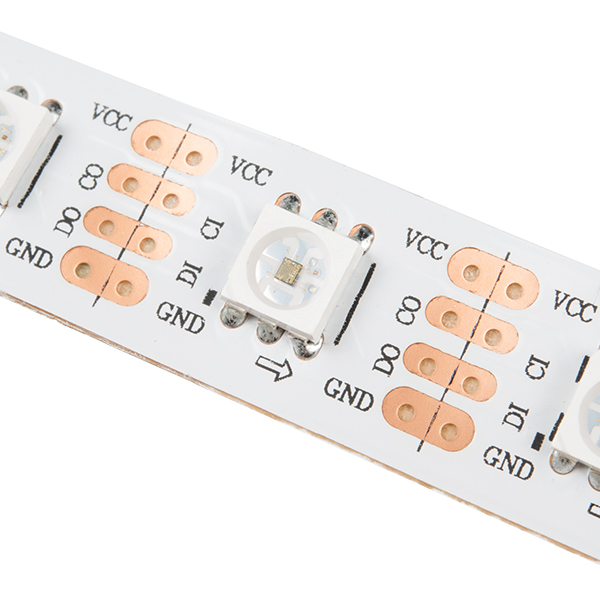 We used Python and the fbsd_gpio python bindings for the code. Install Python and pip first, and then cffi and fbsd_gpio libraries via PyPI.

Note: You may encounter an error when using `pip` which will give an error like:

This is because FreeBSD uses some cross-compile tools on some embedded platforms (mips, arm, aarch64, etc.) which aren’t used in this setup and will cause build errors. The bug has not been fixed yet (Bug 208282), but in the meantime, we could just change all references in /usr/local/lib/python2.7/_sysconfigdata.py as a workaround:

There is a SPI bit banging abstraction in the fbsd_gpio package used below but has not been documented yet. You can use that abstraction and skip this step, or you can still choose to follow it as a good learning practice.

Import the library and create a controller:

Set which pins we are using:

Provide SPI init and write functions (it’s better to use bitwise operators when working with bits):

A complete description of fbsd_gpio can be found in the fbsd_gpio documentation on PyPI.

Once we set up the SPI functions, we were ready to send SPI data, but first we needed to figure out what to send in order to light up the LEDs we want. Follow the APA102 Manual to find out the data format:

Each update consists of a start frame of 32 zeroes, 32 bits for every LED, and an end frame of 32 ones. So our send function will most likely to work as follows:

Read this article if you want to Understand the APA102 “Superled” better.

1. Get data from Jenkins

Many objects of Jenkins provide remote access APIs. We used the provided Python one to get status of all jobs:

And the latest status could be extracted from color attribute in data["jobs"] and stored in a dictionary called status.

The Jenkins API manual can be found in the Jenkins CI API reference.

2. Light up the LEDs

and some send functions:

so that once we updated the status dictionary, we were able to use led_send(status) to update the display:

Now the display works really well with the static states of the job. However, we noticed that the blue_anime and red_anime colours in Jenkins, which indicate a project is in the process of building (and should be blinking), were treated as static status in the code.

How can we make the LEDs blink while keeping their current status? We added a blink_flag boolean inside the loop, reversed it each time, and decided if we should turn the lights off based on that.

Add the flag to the LED updating loop:

and reflect changes in the send function:

We considered splitting the data fetching and the LED updating process, since blinking requires updating the LEDs every 0.5s, but fetching data should be every 20s or even longer. This could be achieved by simply adding a nested loop (for example, 40 led updates, 1 data updates, loop), but I chose to use threading so both jobs will not affect each other if one gets stuck.

Move the LED updating process into a controller class and run it separately:

And the LEDs should be able to blink at an interval of 0.5s.

We cut the strip to parts and stuck them inside a picture frame.

My implementation of this project: yzgyyang/freebsd-ci-ledstrip

A guide of building, installing and updating FreeBSD on a BeagleBone:
Getting Started with FreeBSD on BeagleBone Black

I would like to thank my supervisor Ed Maste for his guidance and support on my work. I would also like to thank Siva Mahadevan, my colleague and friend, for the help and useful suggestions.