In our continuing efforts to recruit more women to FreeBSD, Dru Lavigne and I attended the Grace Hopper Celebration last month. They claim it’s the largest gathering of women technologists in the world, and I believe it! This was the fourth time we’ve had a table in the job fair to recruit people to the Project. Where else can you find 20,000 people, in one place, who have (or can quickly pick up) the skills to contribute to our Project?

I flew directly to Houston from Bucharest, where I attended EuroBSDCon 2018 (check out my article on that conference in this newsletter!). So, I started off the conference in Eastern European time and was suffering from jetlag. Nothing a double espresso couldn’t counter! We started off Wednesday morning quickly setting up our booth for the rush of women we knew were going to stop by.

Unfortunately, our booth was set up with the table behind us. Typically what attracts people to our table at a conference like this is our Rpi 3 demo, Groff, and our brightly colored swag!

Dru and I, being the creative and clever people we are, took advantage of the one stool they provided us by draping the FreeBSD banner on it and putting on as much swag as we could. Unfortunately, I didn’t get a picture, because we both thought it looked pretty good. Giving up the one stool we had also gave us extremely sore feet at the end of each day! But, we are troopers and dedicated to the cause!

Armed with pens in one hand and a lead scanner in the other, we talked to hundreds of attendees about FreeBSD. Some were students looking for internships and we told them about the Google Summer of Code internship program. We talked about how you can gain marketable skills by working on an open source project, and encouraged students to run a FreeBSD Installfest at their local meetups and user group meetings. Many instructors also stopped by, so we told them about the teaching material that is available.

Overall, our primary goals were to promote FreeBSD in general; recruit new users and contributors to the Project; make instructors aware of teaching material and encourage them to incorporate FreeBSD in their lectures, and to get students to include a FreeBSD info session or installfest at one of their meetings.

We handed out over 700 pens and lots of “How to Get Involved” fliers. We scanned in over 230 badges. We would have had hundreds more if we had been more assertive the first day. We’ll use that list to send an email with information on how to get started with FreeBSD.

I believe that educating people about and promoting FreeBSD at conferences like these, is an important long-term investment for the Project. Making students aware of, and getting them started using FreeBSD is going to inform the next startups on what operating system they should use. In addition, it increases the recruiting pool of talented FreeBSD developers for companies who depend on FreeBSD.

Here’s info about the conference next year: 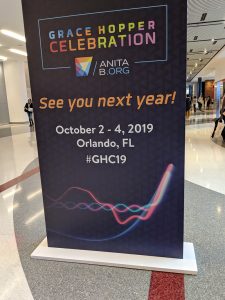 Next year we will make sure to participate in the Open Source Day, which we were told will offer more workshops and talks, that will be more suited for teaching about FreeBSD.