On November 1 and 2, I had the opportunity to attend the Rocky Mountain Celebration of Women in Computing, in Denver, Colorado.  I was thrilled to finally advocate for FreeBSD at a local conference!

This is a biennial event, attended by students and industry professionals from five states. When I first heard about this conference I thought this would be a wonderful opportunity for introducing students and professors, in this region, to FreeBSD. I’ve been interested in giving FreeBSD presentations and workshops at local universities, since we have many FreeBSD contributors in the area. Being able to run more workshops locally will give us a chance to test the content with more people and help with the end-goal of making this curriculum available for teaching at universities and meetups around the world.

I submitted a Lightning talk and told the organizers that I’d be happy to run a FreeBSD workshop. The talk was accepted and they asked if I would run the workshop on Thursday night at 9pm. I thought that was a bit late to run a workshop, but then again, there were no other workshops to compete with at the time, so I said sure! Roller Angel volunteered to run the workshop with me.

There were around 350 attendees, which included a few high school students from the area. I arrived Thursday night and attended the dinner. During the dinner, we watched the documentary “The Computers: The Remarkable Story of the ENIAC Programmers” which was about the first programmers of the ENIAC computer, back in 1946. It was an extraordinary and inspirational story about six women who took on the job of programming this secret computer without manuals, programming languages or compilers. They weren’t even allowed to see the computer!

After dinner, I met up with Roller Angel to get ready for the workshop. We had 35 students show up. I began with a short FreeBSD presentation to introduce the students to FreeBSD and why they might want to use it or contribute to the Project. Everyone then proceeded to install FreeBSD on their computers. While we asked everyone to install VirtualBox before the workshop, I’d say around 1/3 of the students didn’t have VirtualBox installed. Unfortunately, with the extremely slow hotel wifi, getting Virtualbox installed for these folks took a lot of time, and ended up breaking the workshop into two groups. We moved forward with the group that had VirtualBox installed. I had preloaded FreeBSD on flash drives, so the students could quickly load the image onto their computers. The other thing I learned, was many of the students had the USB-C ports on their computers, and I didn’t bring any converters with me. So, that added time.

Since we only had a couple of hours for the workshop, we ran out of time at the point where most people 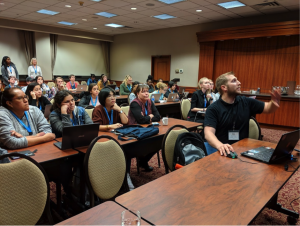 had FreeBSD installed on their systems. However, most of the students were so interested in continuing setting up and trying out FreeBSD, that they asked for copies of the slides.

The interest and excitement of the students in the class told me that this is a great venue for introducing people to FreeBSD. I definitely preferred the size of this conference over the Grace Hopper Celebration, because I could have longer and more engaging discussions with the students and professors. Since this was only the second time I ran this workshop, Roller and I discussed how we can simplify or bypass the install process to focus more on running FreeBSD. It’s not that FreeBSD is difficult to install, but when you factor in people using a variety of platforms, unknown wifi speeds, and challenges with the VM, the entire process can become a time sink. 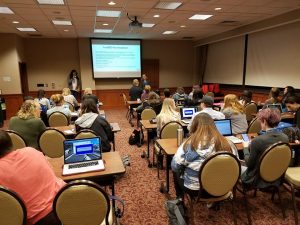 The second day of the conference, I gave my Lightning Talk “Why You Should Contribute to FreeBSD.” I thought it went pretty well, especially when a few people came up to me afterward to talk about FreeBSD. I ended up speaking with quite a few students and professors from many of the universities listed above, about running a workshop during one of their club meetings.

I look forward to connecting with these universities next semester. My goal is to run Introduction to FreeBSD workshops at 4-6 universities. I’ll keep you posted on how this goes!