On the weekend of the G20 summit in Hamburg, a different and more peaceful meeting happened in the Linuxhotel in Essen, Germany. For the third time now, FreeBSD developers, users, and enthusiasts spend the weekend to hack on the operating system and exchange ideas. Attendance has grown slowly, but steadily over the years and this time, we had a new record of 14 people. Most of them were from Germany, but we also had people drive over from Belgium and the Netherlands (not for the first time). I picked up Allan Jude at Frankfurt Airport and together we drove up to Essen. We were excited and a few traffic jams and delays couldn‘t cloud our anticipation. The Linuxhotel is a historic mansion with a big, surrounding park that‘s been remodeled for Open Source trainings and community meetings. When we arrived a few hours later in the afternoon than originally anticipated, we met up with Lars Engels (who arranged and organized the Hackathon) and Mahdi Mokhtari. Mahdi is currently working in Germany for Philip Jocks (CEO of netzkommune.de) and was excited to finally meet us. While we settled in (registration, getting room keys, etc.), Roberto Fernandez Cueto from Bally Wulff Games arrived with his family. After a brief welcoming handshake, I went to my room to unpack.

In May, I was giving a talk about FreeBSD at a Chaos Computer Club event (Gulaschprogrammiernacht = goulash programmer night) in Karlsruhe, Germany. Among the people I‘ve met there was Christian Schwarz, who is currently working on a ZFS remote replication script called zrepl. I had invited him to be part of our little hackathon weekend and he arrived that Friday morning by train. When I returned from my room, the obvious had happened: he and Allan Jude were already happily discussing the finer details of ZFS. This is exactly why we do these kinds of events, to get people together to talk about common interests and get some work done. More people arrived as the afternoon progressed: the author of ezjail, Dirk Engling (aka erdgeist) also brought his wife and two daughters along. Another person that I have never met before was Wolfram Schneider (wosch@). While people started talking about various BSD things, Lars, Mahdi, and I went to buy food for the barbecue we were going to have for dinner.

When we returned, most people had arrived and together we started preparing the BBQ in the park. The Linu 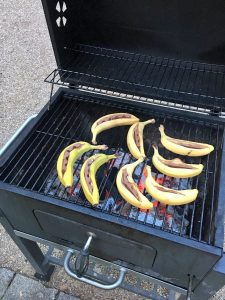 xhotel does have an open kitchen and guests are encouraged to help themselves with preparing food there (drinks are included in the small fee we had to pay for the weekend). Before long, everyone was sitting, eating and drinking. I introduced the group to barbecue bananas for dessert, which are filled with chocolate and put on the grill for a few minutes. The melting chocolate combining with the banana found everyone’s approval. Time spent getting to know each other and talking about various FreeBSD topics went on well into the night.

After breakfast on Saturday morning, we gathered in one of the bigger seminar rooms where chairs, tables, wifi, and coffee were waiting for us. After a brief introductory round, we gathered topics of common interest and did a couple of short discussions. I handed out some goodies that the FreeBSD Foundation had sponsored, which were well received by the attendees. Soon, people started working on individual projects or were gathered around a single laptop screen and discussing code. I had brought a Waveshare 7“ touchscreen display that I wanted to test with FreeBSD on a non-Mac laptop. Bernard Spil was interested and with the help of Roberto (who is doing touchscreen work at Bally Wulff Games), we got it working with a few modifications to TrueOS‘ xorg.conf. The input from the screen was smooth and could be used to select portions of text or draw rectangles in to select icons in Lumina.

While we were doing that, Allan was talking to Dirk about ezjail, in particular jail.conf and future

developments for jails in general. Plans were made for a better configuration system for jails using UCL and how we could integrate Dirk‘s work more smoothly.

Luca Pizzamiglio, (a former colleague of Roberto, who is now working at EuroBSDcon sponsor trivago) and Mahdi Mokthari stuck their heads together almost immediately. I found out later that they are working on a new sub-framework for ports: a meta-build system that generates NinjaBuild files (see https://reviews.freebsd.org/D11554) for details.

We had another BBQ in the park for lunch to finish the leftovers from last night. Alexander Leidinger, who had arrived that afternoon,  also brought two cakes, making the afternoon session well supplied. Christian Schwarz gave an overview presentation about zrepl and wanted to get some feedback from the FreeBSD folks about porting and parsing config files.

In the late afternoon, we packed up to drive in various cars to our social event, which was sponsored by netzkommune. The social event included a two-hour tour with an english-speaking guide of the UNESCO-protected mining company and plant in Essen. A lot of history was presented, as well as, tools, working conditions of the miners, rails, wheels, and mechanisms. All proved to be of interest among hackers and provided a nice distraction from the code discussions of the day. Afterwards, we went to an Italian restaurant for dinner and to get to know each other more. After that, we went back and sat outside in the beautiful Linuxhotel park with a couple of drinks and more code discussions.

On Sunday morning after breakfast, Alexander Leidinger gave a short tutorial about the Linuxulator, how it works and interacts with the kernel. I saw that he is definitely interested in continuing efforts in that area, although it would be better if more people would help. Other people either joined the discussion or continued to hack on their own individual projects. Unfortunately, Allan and I had to leave before lunch so that he could catch his plane back to Canada in time. The Sunday afternoon session seemed like a productive one, as a few more commits were made than the day before.

I want to thank the staff and owner of the Linuxhotel for hosting us and providing a great atmosphere and environment that made this hackathon yet another successful one. Thanks to all the participants of the hackathon and netzkommune.de for sponsoring the social event. Clearly, next year we will have another FreeBSD hackathon in Essen, Germany.