I couldn’t be more thrilled for the outcome of our first ever Foundation hosted FreeBSD Bootcamp on April 16. I’ve talked for years about developing workshops and training material for introducing new people to FreeBSD, and by working with some local FreeBSD contributors, we finally made it happen!

It definitely took some focus, evenings, and weekends to put it all together, but now we’ll have this first introductory workshop available for people to hold their own installfests and bootcamps around the world. 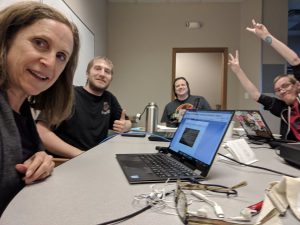 Two weeks ago, we had a planning meeting at the Foundation office, to discuss what we should cover in a 2-3 hour workshop. The goal was to come up with enough relevant content to engage people and interest them in wanting to use or contribute to FreeBSD.

We continued working on the curriculum as we played around with our own FreeBSD setups,
adding what we thought would be interesting to our working document.

After multiple people reviewed and provided feedback, we finalized our material. The process was slightly less daunting, knowing this was going to be a learning opportunity for us to improve on the material based on the experiences and input we received from the participants.

I invited 6 female engineering friends, who were not only interested in learning about FreeBSD, but also open to being our guinea pigs for this trial run of the workshop.

We also designed a fun t-shirt for this inaugural event. 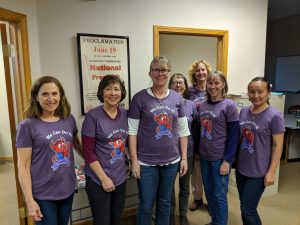 We decided to have everyone install FreeBSD on VirtualBox to allow us to speed through the installation process, and cover more material.

After introducing ourselves and eating some pizza, we began by giving a short “Introduction to FreeBSD” presentation. We then downloaded FreeBSD, which led us to the first lesson we learned, that it took a long time! Next time, we will have people start the download first, then we
can give the FreeBSD talk in parallel.

Once the download was complete, we installed FreeBSD, went through the initial setup, rebooted, and were officially running FreeBSD! That’s when the fun really began. Why? Most of the attendees started out their careers using UNIX, and one participant talked about feeling young again, as she navigated the command line. She also spoke about how this exercise highlighted that when we mainly use MacOS and Windows, we’re removed from understanding the foundation of computers and the hardware involved. Most people nowadays want to get their smartphones, tablets, and computers running with minimal intervention. That’s how I am most of the time, just wanting things to work, and getting frustrated when they don’t. But, understanding the foundation of whatever I’m using, whether it’s a computer, bicycle, or software, makes it so much easier to fix or debug when you understand how those things
work.

Once we were running FreeBSD, we installed xorg, lumina, firefox, sudo, libreoffice, and plexmediaserver packages, added some configuration information, and ran lumina. We completed the workshop by accessing the internet.

In the end, we realized we had more material to cover than time allowed, which is perfect for kicking off the FreeBSD 202.0 Workshop!

Again, I was pleased with the turnout for this event and am now updating the materials, so we can make this workshop available to anyone who would like to host one. I’m also thrilled that this group of participants is already planning for our next meeting where we can continue learning about FreeBSD and hopefully start contributing to the Project!