EuroBSDCon is one of the largest BSD-related conferences that is held in a different European country each year. Each one is organized and run by local BSD contributors, under the umbrella of the EuroBSDCon Foundation, who help provide resources, financial support, and guidance for each conference. This year, EuroBSDCon was held in Paris, France and the FreeBSD Foundation was proud to be a Silver Sponsor. Many of our team members attended and participated in the conference and preceding FreeBSD developer summit.

This was the fifth EuroBSDCon that I attended over the past five years. The location was wonderful and I loved sneaking out and exploring the city when I could. From what I heard, it was the largest BSD conference in history, with over 320 attendees!

Each venue is unique and draws many local BSD enthusiasts, who normally wouldn’t be able to travel to a conference. I love having the chance to talk to these people about how they are involved in the projects and what they would like to do. Most of the time, they are asking me questions about how they can get more involved and how we can help. 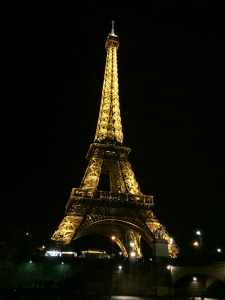 Magical is how I would describe the conference social event. To stand in front of the dinner cruise on the Seine, with the Eiffel Tower standing tall, lit up in the night, while working – talking to our community members, was incredible. But, let me start at the beginning.

We attend these conferences to talk to our community members, to find out what they are working on, determine technologies that should be supported in FreeBSD, and what we can do to help and improve FreeBSD.

We started the week with a half-day board meeting on Wednesday. BSD conferences give us a chance to not only meet with community members around the world, but to have face-to-face meetings with our team members, who are also located around the world. We worked on refining our strategic direction and goals, determining what upcoming conferences we want FreeBSD presence at and who can give FreeBSD talks and workshops there, discussed current and potential software development projects, and discussed how we can help raise awareness about and increase the use of FreeBSD in Europe.

Thursday was the first day of the FreeBSD developer summit, led by our very own Benedict Reuschling. He surprised us all by having us participate in a very clever quiz on France. 45 of us signed into the software, where he’d show the question on the screen and we had a limited amount of time to select our answers, with the results listed on the screen. It was actually a lot of fun, especially since they didn’t publicize the names of the people who got the questions wrong. The lucky or most knowledgeable person on France, was Des.

Most of the two days were spent with FreeBSD developers presenting work on their projects. I gave an overview of the Foundation and some of our recent work, and Scott Lamons, our Senior Program Manager gave a FreeBSD / Intel update with Glenn Weinberg from Intel. This highlighted work being done to support different Intel technologies in FreeBSD, as a result from Intel donation we received back in March.

Some of our board members ran tutorials in parallel to the summit. Kirk McKusick gave his legendary tutorial,  An Introduction to the FreeBSD Open-Source Operating System , George Neville-Neil gave his tutorial, DTrace for Developers, and Benedict Reuschling gave a tutorial on, Managing BSD systems with Ansible.

The conference was officially kicked off Saturday morning, with around 320 attendees. As usual, the Foundation had a table for people to stop by to talk to us and pick up free swag. Historically, or at least for the last 12 years, we’ve taken donations at the table, in exchange for higher quality swag. But, we’ve realized over the years, that it distracts from our purpose of attending these conferences, and that is to talk to and help community members. Of course, we are always happy to take donations, but we are asking people to do those online. We did end up taking 200 Euros in cash donations. ?

Board president, George Neville-Neil gave the presentation, The Realities of DTrace on FreeBSD.

I was pleased to have two chairs from ACM-W Europe run an “Increasing Diversity in the BSDs” BoF for the second year in a row. We broke up into three groups to discuss different gender bias situations, and what we can do to address these types of situations, to make the BSD projects more diverse, welcoming, and inclusive. At the end, people asked that we continue these discussions at future BSD conferences and suggested having an expert in the field give a talk on how to increase the diversity in our projects.

As I mentioned earlier, the social dinner was on a boat cruising along the Seine. I had a chance to talk to community members in a more social environment. With the conference being in France, we had a lot of first time attendees from France. I enjoyed talking to many of them, as well as other people I only get to see at the European conferences. Sunday was full of more presentations and conversations. During the closing session, I gave a short talk on the Foundation and the work we are doing. Then, Benedict Reuschling, Board Vice President, came up and gave out recognition awards to four FreeBSD contributors who have made an impact on the Project. They were:

We look forward to EuroBSDCon 2018 in Bucharest, Romania!