The FreeBSD Foundation was proud to sponsor the 12th AsiaBSDCon 2017, held in Tokyo, Japan, 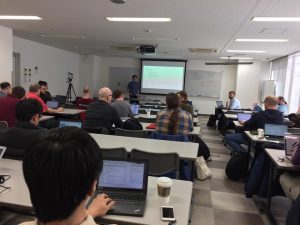 March 9-12. Though we’ve been a sponsor for at least 11 of these conferences, this was my first time attending this conference.

Like most BSD conferences, there was a two-day FreeBSD Developer Summit that preceded the conference. It was organized and run by Foundation Board Director and Core Team member, Benedict Reuschling. I thought he did a wonderful job facilitating interesting presentations and engaging discussions. The event was also live-streamed, so people who weren’t in attendance could still watch the talks.

AsiaBSDCon continues to grow in talks and attendance making it the third largest BSD-related conference around the world.We believe it’s important to support these types of conferences and events that gather people from different regions of the world, not only exposing them to FreeBSD, but allowing them to work with other FreeBSD contributors on problem solving and knowledge sharing. There were 149 attendees from:
Japan – 81
U.S.A. – 18
Germany – 12
India – 3
France – 3
Taiwan – 2
Romania – 2
Mongolia – 2
China – 2
Canada – 2
Belgium – 2
U.K. – 1
Sweden – 1
Spain – 1
Poland – 1
Netherlands – 1
Malta -1
Latvia – 1
Hong Kong – 1
Denmark -1

It was a great representation of BSD contributors from around the world.

On the first day of the conference, each BSD project gave a 15 minute update on their project. I gave a short presentation describing who we are and what we do, which includes facilitating collaboration between commercial users and the Project. With that said, I announced an exciting collaborative effort with Intel to support FreeBSD in more Intel products.

Intel also committed to a $250,000 donation to show their support for FreeBSD as a viable operating system, foster collaboration between Intel, the Foundation, and FreeBSD, and to improve the support of FreeBSD in Intel products and technologies. After making the announcement and introducing our Intel Liaison, Glenn Weinberg, I handed off the mic to let him talk about why they are partnering with us and supporting FreeBSD.

Here is a slide from his presentation: 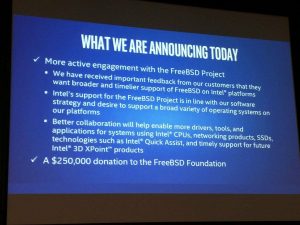 The cool thing is that Glenn is not new to FreeBSD, having worked on 4.2 BSD back in 1984.

During the rest of the event, I spent most of my time talking to various people in the hallway track, but I did have a chance to attend a few talks. One was on “Reproducible Builds”, by Ed Maste, our Director of 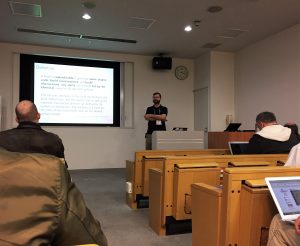 Project Development. I now have a much better understanding of what it takes to create reproducible builds.

My favorite talk was “Comprehensive and Biased Comparison of OpenBSD and FreeBSD,” by Baptiste Daroussin and Antoine Jacoutot. It was fun, respectful, and informative. I look forward to them expanding this talk, and maybe doing this on BSDNow (hint hint).

I’m glad to have finally had the chance to attend this conference. It was quite productive for me to not only talk to FreeBSD contributors, but also to discuss some potential projects that the Foundation can help with. The talks were all recorded and will be available on the website soon.

You can find out more about AsiaBSDCon here.

Events like these are imperative to furthering the growth of FreeBSD, and I look forward to the Foundation’s continued support and sponsorship of these types of events in the coming months and years!