A few weeks ago, most of the Foundation board and staff descended on Ottawa, to attend BSDCan and the preceding FreeBSD developer summit. We also held our annual board meeting the day before the developer summit, which made it a busy, but productive week for us. We make this trek every year, for many reasons. It’s typically the largest BSD conference (which we proudly sponsor) and I’ve found that  most of our board members are already attending, so we can hold our annual board meeting there without having to fly everyone around the world for a separate board meeting. Plus, as the the largest conference, it’s the perfect venue for talking to our constituents and commercial users in person. It also gives us the opportunity to get cool swag into the hands of FreeBSD contributors to promote FreeBSD around the world.

As I mentioned above, we kicked off the week with our yearly all-day annual board meeting. It’s a long day, but we get so much done! We always start out the meeting with elections, and the results are as follows:

At around 17:00 we adjourned, where most of us grabbed quick dinners, so we could attend the yearly FreeBSD Journal Editorial planning meeting. Fueled by a platter of desserts, this team generated a list of issue topics and articles for 2019.

The two-day FreeBSD Developer Summit started on Wednesday, June 6. As part of our charter to help provide face-to-face opportunities for FreeBSD contributors and developers, this is one of the many summits we sponsor. There were over 120 participants from around the world, representing corporations and individuals, who use and contribute to FreeBSD.

Some highlights from the developer summit were: Release Engineering update from Marius Strobl, Security Team Update from Security Office Gordon Tetlow, and Deputy Security Officer Ed Maste, and the Core Team update from 8 of the 9 core team members. I was thrilled to start off the presentations by giving my Foundation Update presentation on my computer running FreeBSD! I set up my computer to run FreeBSD on VirtualBox when we created the Installfest workshop and materials, back in April.  As expected, everything just worked with FreeBSD!

Finally, during the last day of the Dev Summit we celebrated FreeBSD’s 25th anniversary by bringing in a delicious cake for everyone.

Events like these provide a venue for people to work together on existing issues and projects; brainstorm ideas for future projects’ and provide opportunities for vendors to talk directly to FreeBSD developers. Thank you to Gordon Tetlow, who for the second year in a row, organized and ran the summit.

The successful developer summit segued into BSDCan, which started on Friday, June 8. As I mentioned earlier, we were proud to sponsor this conference, which we’ve done for over a decade now. I was happy to see all of the companies who also see the value of supporting BSDs and open source as a whole, including Apple!

The Foundation had a table, as per usual, to allow for people to easily find us to talk about the work they are doing, and what we can do to help. This year, we also “sold” 25th anniversary t-shirts and other swag to raise money and gave away stickers, pens, and tape measures to help the community show their love for FreeBSD. The conference has grown over the years with 280 attendees this year. There were four speaker tracks, plus a separate FreeBSD developer summit track. These conferences provide informative talks, tutorials, hallway tracks, social events, and hacker areas that create wonderful learning and development opportunities. For me, it’s one of the best opportunities to talk to companies about their FreeBSD use. It allows me the chance to have a face-to-face discussion about the value we are providing them and hopefully help them recognize our need for financial support.

In keeping with our mission, we also provided 8 travel grants to FreeBSD contributors around the world. Our grants are available to contributors, who need assistance to attend the conference and have plans to contribute more in the future.

At the Closing Session, we recognized four people for their contributions to the FreeBSD Project:

Steve Wills:One of the most prolific ports committers

In reflecting back on the week, I believe we accomplished a lot. We talked to a few companies interested in supporting FreeBSD on their platform,s and built connections with new people from companies that have been long time users of FreeBSD. Additionally, I was amazed at the positive responses I received from the presentation I gave running on FreeBSD. Not only did I have multiple people ask me for my setup because they were new to FreeBSD, but I also had others who were interested in running their own Installfests using the material we created. I call that a big success! 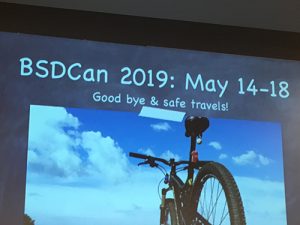